Grab your hat and mitts and experience winter like never before! 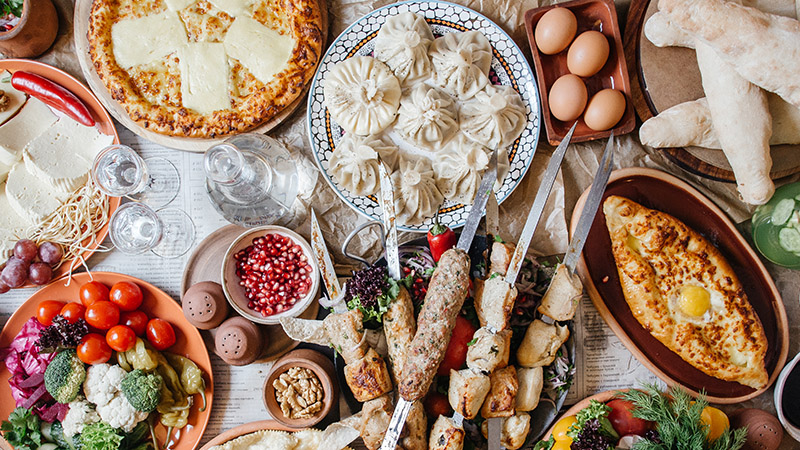 When you are here, every Georgian will convince you to try Georgian traditional food to understand local taste of life. It is true – Georgian dishes have unforgettable taste that will keep Georgia in your heart forever. Georgian Cuisine is perfect for all kind of food lovers: meat lovers, cheese lovers, salad lovers, dessert lovers… If you are a vegetarian or vegan, you can perfectly survive here. You will be amazed by the diversity of traditional food. And if you enjoy eating meat, you are even luckier.

Khinkali is very popular dish in Georgia. It is kind of a dumpling, which originated in the mountainous regions of Georgia. The fillings of khinkali vary with the area. The original recipe consisted of only minced meat (lamb or beef and pork mixed), onions, chili pepper, salt, and cumin. However, the modern recipe used nowadays mostly uses herbs like parsley and coriander.
Mushrooms, potatoes, or cheese may also be used in place of meat. When Khinkali is cooked, the juice of the meat is trapped inside the dumpling. Khinkali is typically consumed first by sucking the juice out while taking the first bite. You have to eat Khinkali with hands because if you put fork in it you will spill the juice which is the tastiest part of Khinkali. 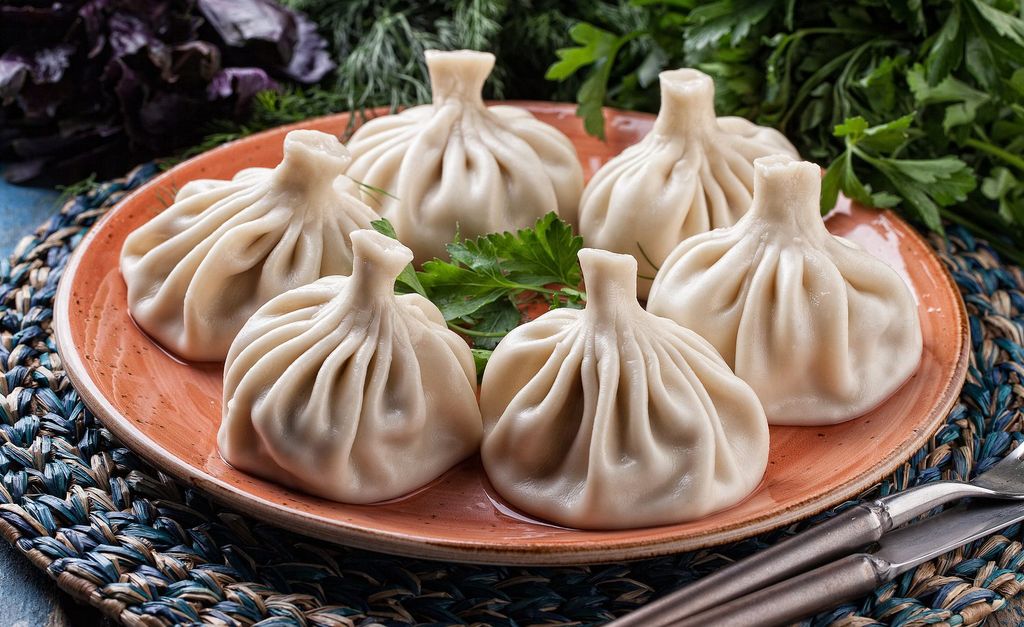 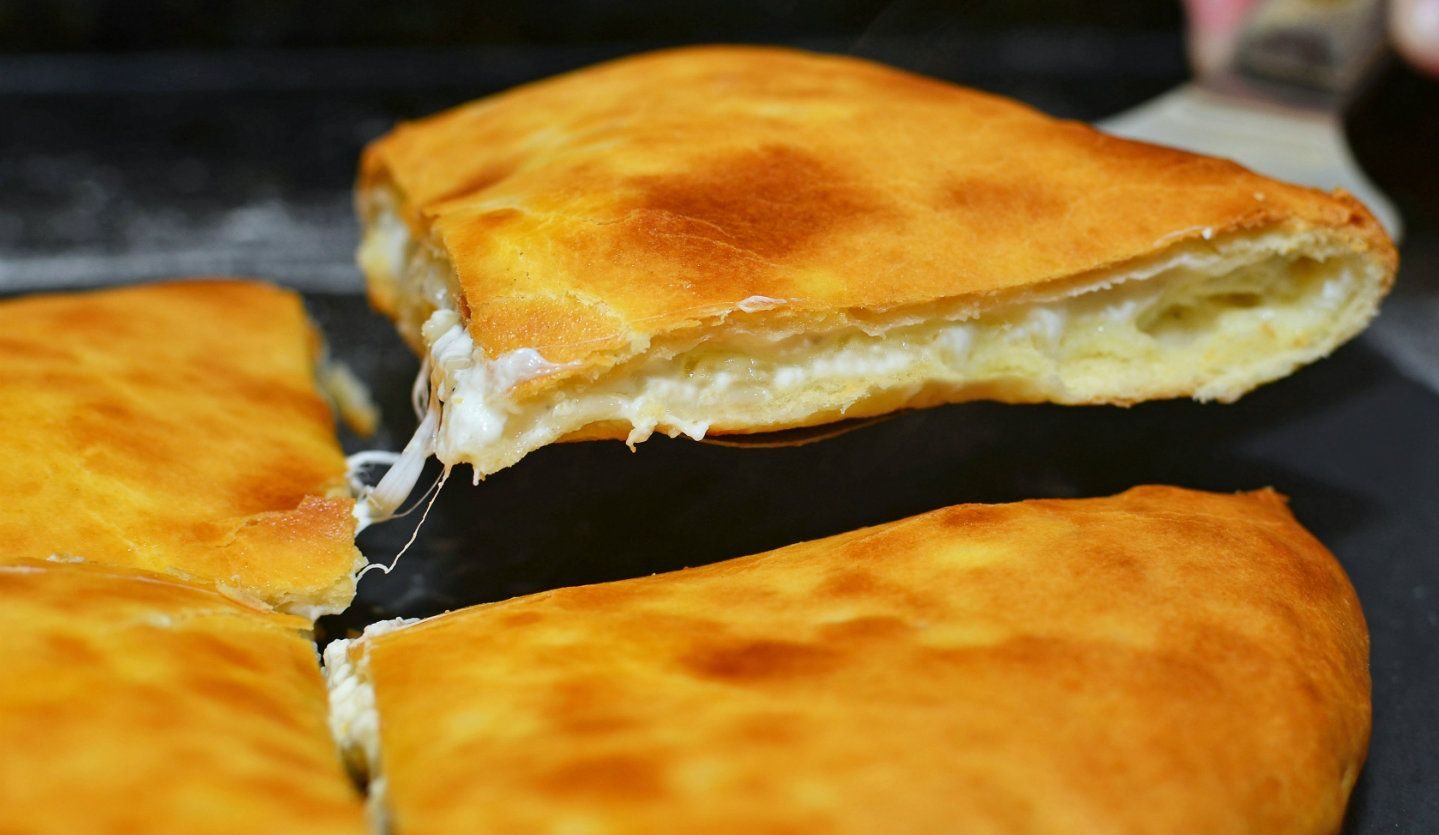 Khachapuri is a traditional Georgian dish of cheese-filled bread. It is very popular both in restaurants and as the Street Food.
The dough is leavened and allowed to rise and is shaped in various ways, usually with cheese in the middle and a crust which is ripped off and used to dip in the cheese. The filling contains Sulguni cheese, eggs and other ingredients.
In 2019 the tradition of khachapuri was given the status of Intangible cultural heritage of Georgia. There are several distinctive types of khachapuri in Georgian food from different regions of Georgia – Imeretian, Adjarian, Megrelian, Achma, Gurian, Ossetian

Shotis puri or simply shoti is a type of traditional Georgian bread made of white flour and shaped like a canoe. Shoti is baked in a specific bakery called tone. The word is cognate with tandoor. The heat in the tone/tandoor is traditionally generated by the wood fire, burning within the tandoor itself, thus exposing the bread dough to a live fire, which is baked from the heat of the tone’s walls, this procedure ensures quite a specific taste and a fast baking. 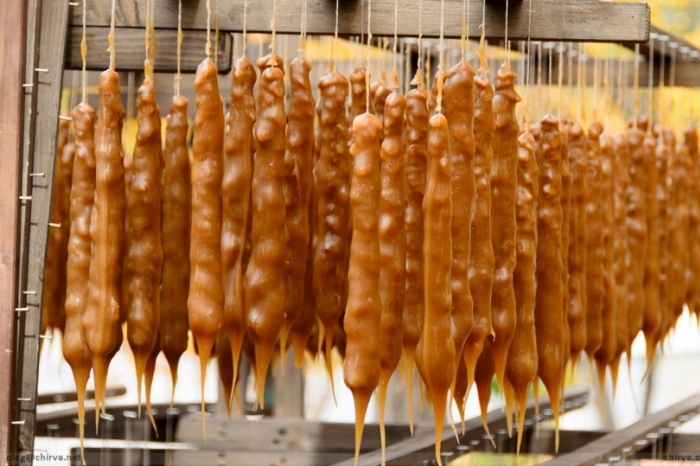 Churchkhela is a homemade Georgian product. Georgians usually make Churchkhelas in autumn when the primary ingredients, grapes and walnuts are harvested. It is a string of walnut halves that have been dipped in grape juice called Tatara or Phelamushi (grape juice thickened with flour), and dried in the sun. No sugar is added to make real Churchkhelas. Instead of walnuts, sometimes hazelnuts or almonds are used in the regions of western Georgia. The shape of Churchkhela looks like a candle. Georgian warriors carried Churchkhelas with them because they contain many calories. The best Churchkhela is made in Kakhetian region, which is known as the motherland of wine.

Booking for Culture and Gastronomy